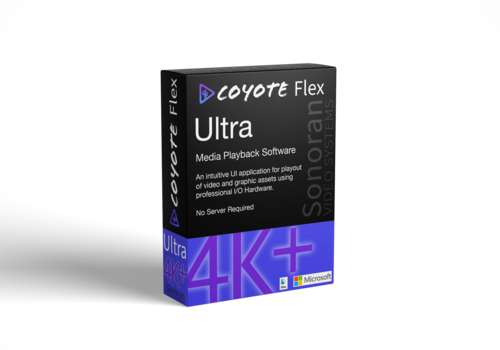 Flex Ultra v3.0, is a multi channel video playback application designed to push up to 4K video out of the, intergrated GPU using HDMI/DP/USB-C, NDI 5 protocols, Thunderbolt 3 or PCIe devices. This version is Windows only (Mac and Linux coming soon. Licenses can be removed at anytime from Windows and added to Mac at a later date)

Coyote Flex software is designed for the broadcast, virtual, and live event spaces. Flex Ultra is a 2 seat license, video and still playback application, that can be installed on Professional Windows PC (Mac and Linux Coming Soon.) Coyote Flex utilizes technology to push multiple video streams via Thunderbolt™ 3 devices, PCIe Hardware or NDI® IP protocol. From just a simple 720p stream, to multiple HD/2K and UHD/4K streams played in sync or spanned across outputs, up to 8k and beyond files, the choice is yours.